A Blast From the Past: Executing Code in Terminal Emulators via Escape Sequences

In this article we'll talk about how we can use an Apache CVE-2013-1862 vulnerability to issue an escape sequence attack. The most common terminals used in the old days were the following.

In the table below we can see the capabilities of most used terminal emulators that we can choose from today.

Terminal emulators usually support escape sequences that abide to the terminal control sequence standards like: ECMA-48, ANSI X3.64 or ISO/IEC 6429. ANSI escape code or escape sequence is a way of sending metadata and control information to the terminal by using the same communication channel by specifically encoding special characters. Since only one communication channel is available, the only thing we can do is print text to the screen and there's no way to actually support anything else. In such cases escape sequences are very useful, because they allow us to mark certain characters as being a command, while the rest of the characters is data.

Many programs use escape sequences directly to introduce different functionality like changing the color of the important text to red. In reality, programs should not emit terminal escape sequences manually, but should rather use ncurses, tput or reset utilities.

Linux terminal controls can be used for calling special functionality in the terminal by using control characters. Character encoding is primarily used to represent printable characters in the screen, but special characters used for presenting additional information about the text are supported – such additional information is the position of the text, a message beep indicating the text has been received, etc [10].

The escape characters are used to support different features like formatting, color change, cursor position, reconfigure the keyboard, update the window title, etc. The encoding works by using a specific sequence of bytes, which are embedded directly into the text stream, but are handled specially by the terminal. There are a different set of escape sequences that was supported by hardware terminals in the old days or is supported by terminal emulators nowdays – we have to look up whether an escape sequence is supported by specific terminal in order to use it.

Today, most terminal emulators interpret at least some of the ANSI escape sequences, which can be generated by a wide range of console programs like: grep, sed, awk, cat, tail, less, more, emacs, etc.

The ASCII table is presented on the picture below, so we can observe the character mentioned with ease. 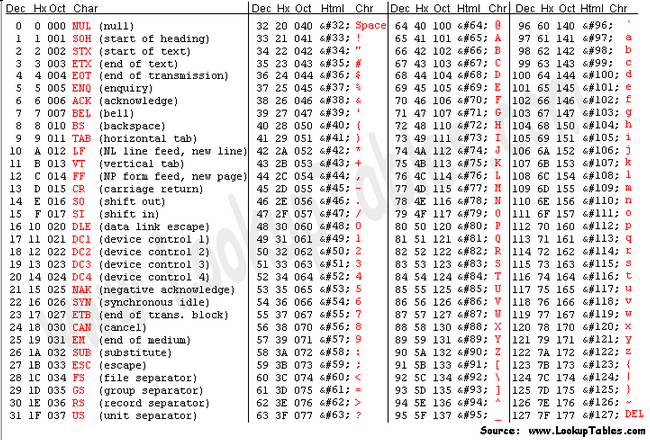 The standard ASCII control codes are the following (and are also presented on the ASCII picture above) [10]:

From the tables above we can infer that escape sequences can be used in two ways:

The elements in the escape sequences are described in the table below.

Prior to showing the real world usage of escape sequences, let's also take a look at the man page of echo command used to display a line of text in the terminal emulator. We'll be using echo command to show how escape sequences can be used when printing text to a terminal emulator. When the echo is used together with the -e parameter, it will enable interpretation of backslash escape characters, which are the following:

Let's take a look at the few escape sequences and how we can use them [5]:

The syntax of the color escape sequences differs based on whether we're trying to change text color or background color in a terminal emulator. The syntax for each of them is presented below:

To use the same example as before, we can display the word 'sunny' in red by adding the red escape color sequence before the word like presented on the picture below. After the sunny word, we must reset the text color back to black by using the black escape color sequence, otherwise the rest of the line will be displayed with a red text.

So far we've only used "echo -e" to use escape sequences in order to present certain words in red instead of in black color. But when an attacker wants to exploit a vulnerability in an Apache web server, he must be able to include special characters in log files, which get parsed as escape sequences when being displayed in the terminal emulator. Below we can see the usage of printf command where the standard string sentence is being piped to the test.bin file. When displaying the contents of test.bin file to terminal emulator with cat command, the escape sequences are taken into account, since the "sunny" is written in color red. At the end we're also displaying the contents of the test.bin file in hexadecimal format with xxd command to see the hexadecimal bytes consituting the text file.

We can also edit the text file in vim editor to see the bytes comprising a file.

Therefore if an attacker would like to use the escape sequences, he must be able to save those bytes into the log file, which will consequentially be outputted by a victim by using the cat command.

Escape characters are often used in shell scripts to provide syntax highlighting, but they can also be used by an attacker to cause terminal emulator to print garbage characters as well as possibly execute arbitrary commands in the system on which the terminal emulator is running. For an attack to be possible, an attacker must be able to display arbitrary data in the victim's terminal emulator. An attacker can do this by using security vulnerabilities in different software components to save save arbitrary data to the log files – an example is the CVE-2013-1892vulnerability in Apache HTTP server 2.2.x before 2.2.25, where the mod_rewrite module writes arbitrary data to the log file without sanitizing special characters, which could be used to present escape sequences. A complete description of the vulnerability is presented below.

mod_rewrite.c in the mod_rewrite module in the Apache HTTP Server 2.2.x before 2.2.25 writes data to a log file without sanitizing non-printable characters, which might allow remote attackers to execute arbitrary commands via an HTTP request containing an escape sequence for a terminal emulator.

Because the vulnerability exists in Apache HTTP server, it allows attacker to write escape sequences into the error log files.

The test the screen dumping capability, we will download the rxvt version 2.7.8, which we can do by using the following commands. The compilation will most probably fail, which is why we need to apply thispatch, which will solve the problem and we'll be able to build successfully.

Then we have to consult the rxvt documentation available in rxvt-2.7.8/doc/rxvtRef.html file, which contains the following escape sequences:

Let's now execute the command presented on the picture below in the newly built rxvt; we're using echo to introduce escape sequences to the current terminal emulator. The red box (number 1) represents the "ESC c", which resents the contents of the current terminal window. Next the "data" string representing the actual file contents is echoed to the terminal window. Afterwards, there's the "ESC ]55;Pt", where the Pt text string is '/tmp/index.php'. That command dumps the current contents of the terminal window into the file /tmp/index.php. At the end there's a bell character indicating the end of command.

Once the command is executed, only the word "data" is present in the terminal window, while the rest of the characters have been reset.

If we display the contents of the /tmp/index.php file, we can observer that the word data is present in it with a bunch of new line characters. Therefore the attack on the terminal emulator has been successful and an arbitrary file was written on the file system. An attacker can use this functionality to create a backdoor in the DocumentRoot of the Apache web server in order to gain complete access to the system.

The actual vulnerable code is present in the rxvt-2.7.8/src/command.c source file, which contains the code presented below. The code is using a switch statement, which checks whether the current switch statement is Xterm_dumpscreen in which case, a file handle is open and the contents of the screen are dumped to the file, then the file is closed.

All in all, this makes an interesting attack vector, which we must be aware of when penetration testing. If we can convince the application into writing a non-printable characters to a log file, then arbitrary escape sequences can be included in the file, which could be used to execute arbitrary code in a vulnerable version of a terminal emulator, write an arbitrary file to the file system, etc.

An additional research needs to be done to determine whether recent terminal emulators are using dangerous escape sequences that could lead to a system compromise. The terminal emulators on Android, iOS and other embedded systems are the ones that should be checked.