Methods for Bypassing a Filter

Common tactics that are used to evade filters are listed below:

We also need to keep in mind that if the packet filters can’t effectively protect whatever they are protecting, this is because the packet filters are interpreting the stream of data in some way, but the protected application is interpreting it in another way. Such an example would be web servers that tend to fix malformed requests, and there are modules to correct some URLs to specific documents and paths, such as mod_spelling. So you can try to send "broken" requests hoping that the packet filter will consider it harmless, but the web server will still interpret it correctly. This can be summarized with one sentence: the target application doesn’t see the same as the packet filter.

With base64 encoding we can present any kind of binary data. It enables us to use only ASCII characters to represent any hexadecimal data block.

The ASP.NET Framework contains the XSS Validation feature that was added into the framework on April 2003 and is available in ASP.NET versions 1.1 in 2.0, 3.0, 3.5, 4.0, 4.5. The XSS validation feature checks every request for malicious characters and filters them.

A good example of this feature is when a form field contains an XSS vulnerability. Whenever a user enters his/her name into the input field, his/her name is printed into the web page. But if an attacker enters a string like <SCRIPT>alert("hello from script")</SCRIPT>, then the XSS is possible and should normally happen. But the ASP.NET blocks the attack, because it validates the input string and detects that it contains malicious characters. In such cases the ASP.NET framework might display the following error to us when we try to input malicious data into an input field.

In the picture above, we can see that the ASP.NET displays an error about dangerous invalid input being used in the Test parameter. Some ASP.NET applications don’t check for invalid input values, because the XSS validation is disabled. To enable XSS validation, we must configure the web.config application configuration file to contain the following:

To bypass the above ASP.NET XSS validation, we must enter such an input value that the ASP.NET will not recognize it as malicious, but the underlying application will be able to handle it, and will include it into the HTML code.

It isn’t rare to stumble across the reflected XSS vulnerability that is present in a web page. After writing a vulnerable Javascript code to be executed upon clicking on the malicious link, the exploit only works in Firefox, but not in IE, Chrome or Safari. In the picture below we can see how the XSS can be successfully exploited in Firefox:

But in IE the following message is displayed, which prevents the JavaScript code from running:

This is because the IE uses an XSS filter that can be enabled/disabled if we go into the Internet Options and click on the Security tab. Then we must choose the "Custom Level" button as show in the picture below: 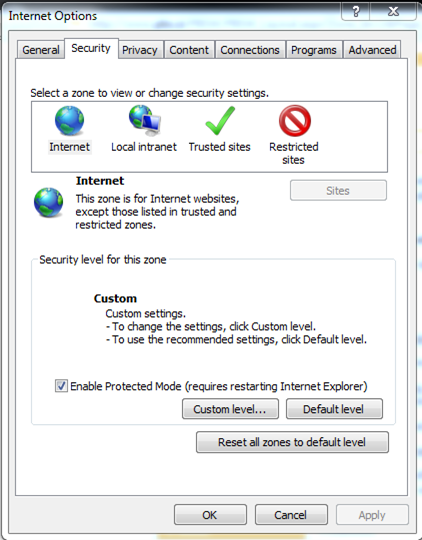 After that we need to scroll down a bit to enable/disable the XSS filter.

We saw that IE showed a message box informing us of an XSS exploit, while other browsers don’t do any such thing, they just block the XSS attack and that’s it. The XSS can be prevented in browsers because each browser implements an anti-XSS filter that attempts to detect and prevent XSS attacks. If an attack is detected, the malicious JavaScript is filtered out and the web page is shown normally.

At the end of the exploitation, the web browser is just doing what it can to help detect and block the XSS attacks and protect the users. But we can’t rely on anti-XSS filters to block the XSS attacks; we should rely on the developers to write security conscious code that doesn’t include XSS vulnerabilities in the first place.

You can read more about defeating the anti-XSS filters being defeated in the following link: http://soroush.secproject.com/blog/2012/06/browsers-anti-xss-methods-in-asp-classic-have-been-defeated/ .

The main idea of bypassing a packet filter as well as anti-XSS browser filters is to craft requests semantically equivalent to an XSS attack, while avoiding the security policies. For XSS, we usually don’t want to use common JavaScript methods to steal user information, such as: document.write(), document.cookie(), alert(), etc. The problem is, the majority of the packet filters will filter the request immediately if one of these methods is found in a request.

When trying to come up with a semantically same JavaScript code, but obfuscated in some way, we can use the browser’s interactive console to test, as shown in the picture below:

But at the end of the day we need to bypass all of the packet filters, anti-XSS validators, etc. The picture below shows a great example of what really happens when we send a malicious request to the vulnerable web application. First, the request is constructed and sent over the Internet to the vulnerable machine, where it is accepted by the application’s web server. The request is then handed to the ASP.NET web framework, which matches the request against its own database of malicious strings. We already described the ASP.NET XSS validation, which is exactly what is happening at this level.

After the ASP.NET validator checks, it can determine if it is malicious or not. We need to construct such a request that won’t be detected by any kind of packet filter, so the ASP.NET XSS validator checks the input value and passes it on to the application, because it didn’t detect anything malicious. In a web application the developer can have a custom filter, which additionally checks the request for anything weird.

After it passes all server side packet filters, the request is processed and a response is formed and sent to the user’s web browser. The web browser receives the reply and then matches it against the anti-XSS web browser packet filter. The response (which also contains the JavaScript from the request – since this is how the XSS attack works) must not contain anything the anti-XSS filter thinks is malicious. After validation, the response is passed to the web browser, which processes it and displays the results on the screen, making XSS possible.

In the above example, we included the <script>alert(‘Hi’);</script> into the malicious requests, which was then checked and displayed back to us. But that doesn’t really work nowadays anyhow, because the <script> substring is detected by most of the packet filters as malicious. This article wasn’t meant to provide any new XSS bypassing techniques, but merely to present the whole process of packet filtering in easy to understand tutorial for the reader.