Let's present all of the registers, as seen in OllyDbg: 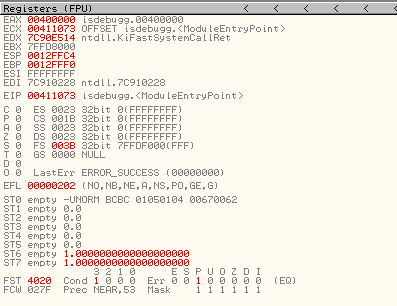 Let's explain this picture a little better. At the top of the picture, the general purpose registers are given. The EBP and ESP registers are generally used with stack frames, while the other registers can be used by the program in whichever way the program wants. Those registers are: eax, ebx, ecx, edx, esi and edi. What follows is the EIP register, which is particularly important because it contains the address that points to the next instruction that will be executed. Then there are the 6 flags from the EFLAGS register, they are C, P, A, Z, S, T, D and O. In the next column, segment registers are shown, being ES, CS, SS, DS, FS and GS. The "CS 001B 32bit 0(FFFFFFFF)" means that the code segment register contains selector 001B, which is a 32-bit segment register starting at 0x00000000 and ending at 0xFFFFFFFF (which means that the segment spans entire address space).

The EFLAGS register is a 32-bit register that contains 32 flags where each has a meaning of its own. Among all those flags are also 8 flags that present the state of the processor at any given time. Notice the flags, as seen in the OllyDbg Registers window: C, P, A, Z, S, T, D, O are part of the EFLAGS register. In this subsection of the article, we'll describe each of those registers and try to understand why they are used. The flags mentioned above correspond to the following:

SOF means signed overflow flag, while the UOF means the unsigned overflow flag. The same is true for the carry flag as well. Let's try to figure out what's happening in the code above. In the first example, we're adding two 0x40000000 values together that results in the 0x80000000 value, which sets the 31 st bit to 1, which means that if we're operating with the number in a signed manner, it's actually a negative number, as we can see printed in the SOF line (the negative number was printed because we used the '%d" specified in the printf function call, which prints the signed decimal number). Contrary to that, we can look at the number as it's unsigned, which means we need to use the '%u' specifier that displays the number as unsigned decimal integer. In this case, even the 31 st bit isn't used to specify the number signness, because the unsigned integers are always positive integers. Since the 31 st bit is set to 1 in this case, the OF flag is set, because of the overflow of the 31 st bit.

If we take a look at the instructions we've inputted in the __asm block in the executable with OllyDbg, we'll find the following:

We've already set the breakpoint at the 0x004136EE instruction, which is the beginning instruction in our __asm block. After executing the first "add eax, ebx" instruction, the SF and OF flags will be set, as can be seen on the picture below. This is exactly what we've been talking about: the OF flag is set because this flag is used for signness operations, so since we've overflown the 31 th bit, this flag is set. Note that the flags that have been set in the previous instruction are presented in red. 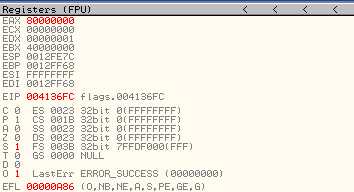 After executing the second "add eax, ebx" instruction, the CF flag is set, as can be seen on the picture below. This is because we've overflown the 32-bit register, so the value can't be presented anymore. Also notice that the value in the register eax is 0x00000000, as we've previously discussed.

There are several segment registers that are being used by the operating system and are listed below:

If you're reading this, then you're probably aware that floating point operations in CPU take considerately more time than their integer alternatives. Because of this, processors contain the FPU (Floating Point Unit) that has 8 registers named ST0, ST1, ST2, ST3, ST4, ST5, ST6 and ST7 and are 80-bits wide. Those registers are used to store floating point numbers that are either 32-bits long or 64-bits long. In the C++ program, the types double and floats are synonyms for those.

Let's take a look at the following example written in C++:

Let's use Wolfram Alpha to calculate the result of the square root of the 128.88. To do that, we must visit the URL address http://www.wolframalpha.com and input the sqrt(123.88) into the input box and press enter. The result is shown on the picture below: 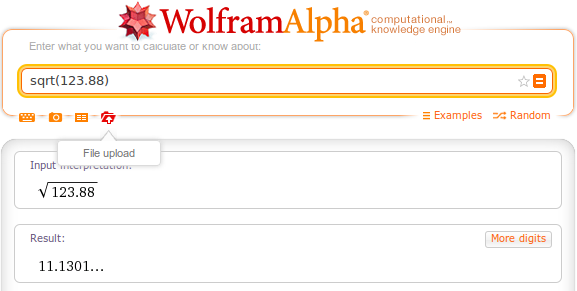 We can see that we've gotten the same result, 11.1301, which is the square root of the 123.88 floating point number. This proves that our program works as expected. Let's take a look how OllyDbg presents the instructions:

After executing the fsqrt instruction, the value in the ST0 register is the square root of the 123.99 floating point number, which can be seen on the picture below:

Once we're done with executing that instruction, we've saving the value back into the variable num and printing it to the console window.

In this post, we've seen the basic usage of registers. We've presented the way registers are used in OllyDbg, but it's the same among all debuggers. We've seen what the EFLAGS register is for and especially the ST0 registers that are often left from the assembly tutorials and reverse engineers don't exactly know what they are used for. This articles should fill this gap; so if you're interested in reverse engineering and understanding the registers, it should come quite handy to you.