If we enable the "Disable privileged I/O" feature in the hardened kernel and reboot, we can't start X server. That's because Xorg uses privileged I/O operations. We might receive an error like this:

But if we want to have privileged I/O operations disabled, and use Xorg, we can apply a patch to the xorg-server, which can be obtained here. We can apply a custom patch in Gentoo by using the epatch_user function, which applies patches found in /etc/portage/patches/<category>/<package>[-<version>[-revision>]] to the source code of the package [8].

After reactivating the system, we can rebuild the kernel and enable the "Disable privileged I/O" option. Then copy the newly built kernel to the /boot partition and restart the system. Xorg should then start without problems.

When we've recompiled and rebooted into the new PaX enabled kernel, it will automatically start using memory restrictions, ASLR, etc. Enabling PaX in the kernel is what we need to do to make the kernel (and therefore the system) more secure.

But some executables, like Skype, won't work with those enforcements. That's because the security limitations are steep. If we'd like to run Skype, we need to configure the PaX restrictions in the ELF executable.

The first thing we need to do is enable the "CONFIG_PAX_XATTR_PAX_FLAGS" option in the kernel, rebuild the kernel, and reboot. That option instructs the kernel to read the PaX flags of the ELF binary when executing the program. That must be supported by filesystem in use in order to work.

The correct options in the Linux kernel are shown below. 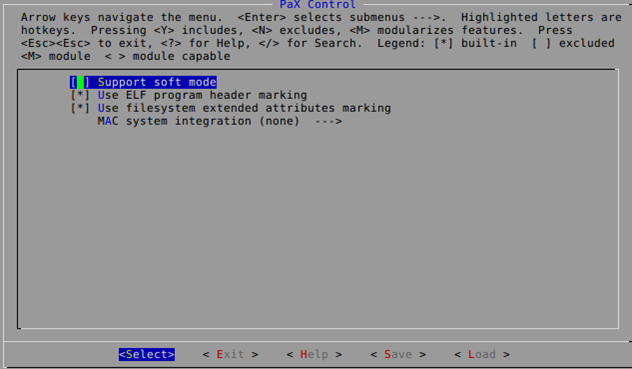 Whenever we want to enable PaX, we need to choose between two modes:

We already mentioned that PaX supports the following features. They can be set to one of the presented values (summarized after [5]). The letters in the brackets represent the letter, which can be used to control the corresponding feature on a per executable or library basis. We can only enforce the settings for the PAGEEXEC, SEGMEXEC, EMUTRAMP, MPROTECT and RANDMMAP on per object basis. The upper-case letters are used to enforce the setting in softmode, while the lower-case letters are used to relax the setting in non-softmode [5]. The bolded PaX protection features must be applied to ELF executables in order for them to be used, while the other features are applied to the kernel level.

There are two ways of setting PaX enforcements on the binary programs, which are presented below. We usually should choose one of the options. If all are enabled, the PaX flags should be the same for all of them. By changing PaX flags, we're effectively enforcing or relaxing some PaX restrictions on ELF executable. That might be needed when the program uses memory in a way that isn't allowed.

PaX enforcement flags set on processes are those set by the program's ELF executable, and not one of its shared libraries. That's because a program normally links against multiple shared libraries, and there's no way to actually determine which shared library would take preference when setting PaX flags. Also, if the PaX flags of chosen shared libraries are poorly set, that would affect the security of the whole system.

Let's install a few of the tools that we need when working with PaX enabled executables. The command to install the most important packages regarding PaX is presented below:

Alternatively, we can use the paxtest tool, which checks how the PaX settings affect our system, by trying to attack it. There are a number of test cases, which are done by this tool and available to the user.

An example of running paxtest on non-hardened kernel is presented below.

In the output above, there are various vulnerable test cases. They're fixed in the hardened kernel, as seen below.

RBAC operates with roles, which define the operations that can be done on objects on the system. To ensure that users are only allowed to do certain operations, each user must be assigned a RBAC role. Therefore, RBAC is used whenever we would like to restrict access to resources to authorized users.

While Grsecurity and PaX are used to prevent attackers being able to gain code execution on the system, RBAC exists to prevent authorized users from doing something they shouldn't be doing.

If we'd like to use RBAC, we first need to enable it in the kernel. We've described the "Role Based Access Control Options ", which are used to specify the kernel options used in RBAC.

Those kernel options can be seen below. 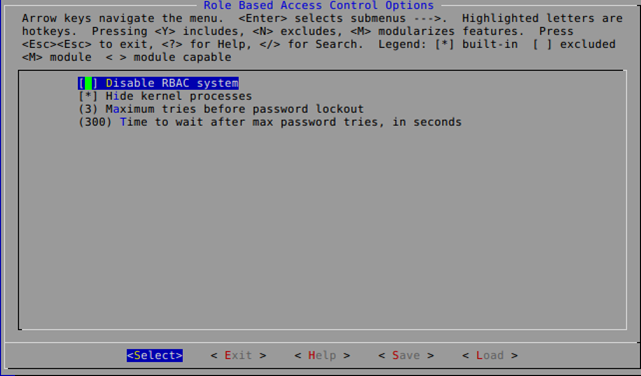 For example, the RBAC can be used to restrict access to ssh. Rules can be put in place to prevent some users from sshing into the box, but enable them to use scp to transfer files between systems.

One really important example of using RBAC controls is when a root-owned binary has the SUID/SGID bits set. In that case, any user who runs the executable will run it in the context of the root user. To prevent that, we can enable appropriate RBAC rules, which will give only certain users access to that executable.

When an attacker gains access to our computer, he or she can load a kernel module into the kernel to get a permanent backdoor into the system. That usually happens with rootkits.

That problem can be prevented by digitally signing kernel modules, which is supported from kernel version 3.7. If we'd like to enable this option, it can be found under "Enable loadable module support" and can be seen in the picture below as "Module signature verification".

Remember that after we've built the kernel, we should move the private key .priv to a secure location. If we keep it in the /usr/src/linux/ directory, it can be used by the attacker to sign its own modules, which can then be inserted into the kernel.

If we'd like to harden files downloaded from the internet, we should use ClamAV anti-virus software. First, we have to install the required packages, which we can do with the command below:

Then, we need to update the virus database with the freshclam command, which downloads the main.cvd, daily.cvd and bytecode.cvd that contain signatures used in virus detection. Then, we should download the EICAR virus from the official website onto our disk. We should download the EICAR virus saved in .com and .txt files as well as the one embedded in a single and double zip archive.

After that, we should scan that directory for malicious files with the clamscan command.

But after downloading the file from the internet, we don't want to be running clamscan automatically every time. That's because it'll quickly become tiresome and we'll probably stop doing it, which completely defeats the purpose.

Instead of doing that, we can run the clamd daemon, and then scan the directory with the clamdscan command. But how is that better than before? We still need to run a command line program to actually scan the file. A good thing about the ClamAV daemon is that all programs in the system can use it to scan files for viruses.

After that, we still need to solve the problem of automatically scanning the files once they're downloaded. One solution is to use ClamFS, which is a user-space filesystem that scans every file on the mounted filesystem when we try to access it. The files aren't necessarily scanned once they are downloaded from the internet, but when accessed by the user. Nevertheless, this is just as secure, because for some attack vectors to be triggered, the user needs to open file first.

The second option is Avfs, which is quite similar to ClamFS, except it can also quarantine and isolate infected files, so they will never touch the disk. Plus the user processes won't be able to access them.

After installing clamfs, we need to edit the /etc/clamfs/clamfs.xml file to fit our needs. In the xml configuration file, we need to provide the following:

After we've configured clamfs, we need to start it and add it to the default runlevel, so it'll start at boot time.

Then, we can copy the previously downloaded EICAR viruses to the configuration's root directory. That's where we should copy the files to be scanned. After copying the file into the root directory, the same file will be available in root as well as in the mountpoint location.

We should remember that we should open files from mountpoint location if we'd like them to be scanned by ClamAV once accessed. The picture below shows the eicar.com.txt file, which was opened from the root directory. We can see that the EICAR virus is there and wasn't blocked, which is because we've opened the file from the wrong directory.

But if we open the same eicar.com.txt file from the mountpoint directory, we can see that the EICAR virus isn't there anymore, because it was removed.

At that time, we accessed the eicar.com.txt file. That's why it was scanned by the ClamAV anti-virus scanner. That can be verified by using logging options, where the message about scanning and detecting a virus is appended to the logfile. That can be seen below, where we can see that the process starts to scan the eicar.com.txt file by connecting to the clamd daemon. It detected the Eicar-Test-Signature.

In this article, we've presented various techniques that we can use to harden the security of a Linux system. It's also great to have a table where we can check whether certain security enhancements have been applied to our system. That can help us when securing our system so that we don't forget anything important. Note that the table was summarized after [12].