Bridged networking can be used when we want our guest virtual machine to get the IP address from our router and be able to see the host and all other machines in our LAN network. This is also a requirement if we want to have a server on the guest VM and would like other computers in the network to access it directly.

The first thing we must do when setting up bridging is actually to create the bridge by using the brctl command, which is available in the bridge-utils packet.

After that we need to add the physical interface eth0 (providing access to the network) and virtual interface tap0 to the bridge.

But we don't need to do that by hand. We can simply edit the /etc/network/interfaces or /etc/conf.d/net (depends on the Linux distribution) file appropriately. On Gentoo Linux system, the /etc/conf.d/net configuration file is used, which might contain the following, which sets up the eth0 and tap0 interfaces and br0 bridge;

After doing that, we need to create the symlinks for all the network interfaces in /etc/init.d/ directory, as shown below:

When this is done, we only need to start the br0 bridge interface and everything will be done for us automatically; if the tap0 interface is missing, it will be created automatically, so we don't need to do that by hand.

From the output above, it's clear that the net.br0 script first destroys the current br0 bridge if already present and then creates a new br0 bridge and adds the eth0 and tap0 interfaces to it. At the end, it runs dhclient on the br0 interfaces and receives the 192.168.1.105 IP address. At that time, we'll be connected to the outside world by using the br0 interface.

We must also add the net.br0 init script to the default run level, so the bridge will be automatically created when booting the system.

Now we've described the basics of the bridged networking, but we still need to bring the QEMU into the story. We need to start QEMU with the "-netdev tap,id=net0,ifname=tap0,script=no,downscript=no -device e1000,netdev=net0" command-line options, which basically say to use the host TAP interface tap0 and disable the script and downscript, which are used when starting/stopping the guest virtual machine; we've disabled those two scripts because we don't need them, since the tap interface is already present. We would want to use those two scripts when the tap interface isn't already present on the system and when we would like to create it automatically when starting the virtual machine. The "ifname=tap0" option is important to tell QEMU the name of the tap0 interface, which was already created on the system.

The Windows 7 guest virtual machine would then use tap0 interface, which is in the same collision domain as eth0, so when the Windows operating system would broadcast a DHCP request, it would be sent over the bridge to the eth0 interface and to the network DHCP server, which would reply with a DHCP lease giving the guest VM an IP address. The picture below presents that the guest virtual machines received the IP address 192.168.1.106. 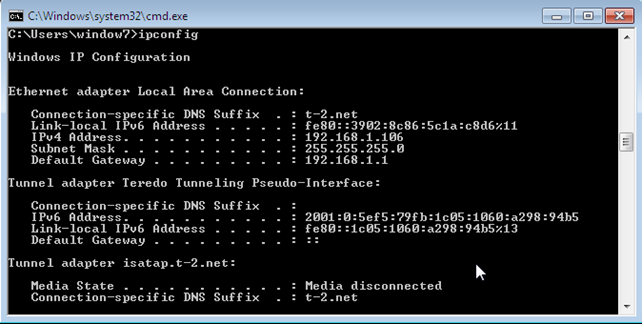 Let's now also ping the guest VM from host to see whether the guest operating system is accessible over the network. The output below presents the successful pings coming from host to guest VM, which indicates the networking is working.

If we're doing this on a laptop where we're not connected to the cable interface eth0, but rather to the wlan0 wireless interface, we're in a trouble.

If we simply add the tap0 and wlan0 interfaces to the bridge and restart the /etc/init.d/net.br0 init script, we would receive an error, as shown below. The problem in the wireless specification, because the AP can only accept the packets from the authenticated clients by looking at the MAC address. If the MAC address is not authenticated, it will reject the packet. This essentially happens when a guest virtual machine sends a packet with its own MAC and IP address. Since the MAC address is new (from the guest VM), AP will reject that packet; this happens because the VM is not part of the actual AP client list. A somewhat more detailed explanation can be found here. We can solve the problems in two ways:

Virtualbox solves this problem by silently translating the MAC addresses to the MAC address of the wlan0 interface wireless card. This means that the AP sees only one MAC address and multiple IP addresses for each of the guest virtual machines and host network. This is essentially like NAT at a layer 2 instead of layer 3. If we would like to use wireless network card with bridging mode in QEMU, we basically need to do something similar.

To use ebtables, we must first compile the kernel:

Remember from the iptables course that there are three tables: MANGLE used for mangling with packets, FILTER used for filtering packets, and NAT used for network address translation. The NAT table contains three queues:

With ebtables this is essentially the same, except we're talking about MAC addresses rather than IP addresses. Let's present the ebtables rules that we need to use in order to use the right MAC addresses.

I've also created two pictures demonstrating the above rules, where the first picture demonstrates the packets coming from AP to our VM and the second picture shows the packets flowing from VM to AP. The first picture can be seen below and demonstrates the AP sending the packet with the source MAC address set to ap and destination MAC address set to br0 to the br0 interface. At that point the PREROUTING rule is activated, which translates the destination mac address from br0 into vm (the

MAC address of our virtual machine). After that, the POSTROUTING queue is translating the source mac address from ap to br0.

The second picture demonstrates how the packet flows from VM to AP. When the packet from VM reaches the tap interface, there are no changes by the PREROUTING rule, but the POSTROUTING rule changes the source MAC address from vm to br0, so the packet will be accepted by the AP.

So far we have only described the theory of the process, but let's actually do it now. I wrote a command, which prints the interface name and its corresponding MAC address and can be seen below:

The commands below add the actual ebtables rules that we need for bridged networking mode, which we can use in QEMU. The first

But we also need to ensure that the virtual machine that will use the interface tap0 always gets the IP address 172.16.1.2. We can do this by either of the two methods:

But, when restarting net.br0, we can quickly figure out wlan0 cannot be added to the bridge br0. We'll receive an error like the one shown below:

I searched for the solution for quite some time and then I stumbled upon the solution that this is no longer supported by the newer versions of kernel and the fact that it works in Debian is because Debian uses an older version of the kernel. The solution for this problem is adding just the tap0 interface to the br0 bridge and running dnsmasq DHCP server on the br0 interface. Therefore, all clients connected to tap interfaces that are bridged to the br0 bridge will automatically receive IP addresses. Then we only have to add the right route and iptables entries and enable ip forwarding on the host. We'll go through all of those steps now just to make sure everything actually works the way it should.

First we have to set up the dnsmasq DHCP server by editing the /etc/dnsmasq.conf and adding the following configuration directives. 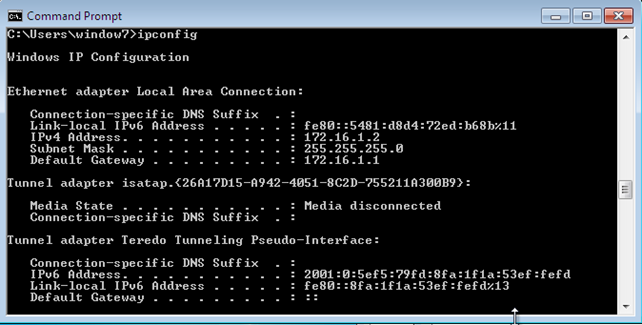 Notice that the IP address is 172.16.1.2, which means that the MAC address must be properly set. We can verify that by showing the detailed settings of our network card seen below: 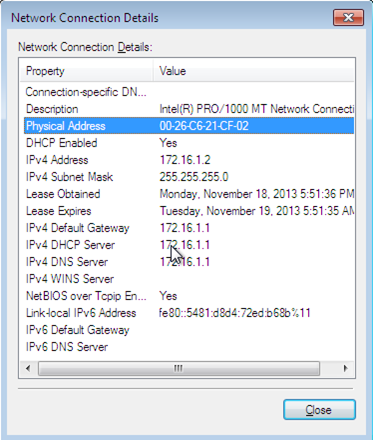 The MAC address is the same as was configured in the DHCP server to set static IP address. We might just as easily set a static IP address directly in the /etc/conf.d/net configuration file, but then we would have to do that for every interface added to the br0 bridge. The host and the guest can now also ping each other, but the Internet is still not accessible from the guest operating system. We can verify that with a simple DNS request by executing an "nslookup google.com" command.

To give guest virtual machines access to the internet, we have to set ip_forwarding to true, so our host will be able to forward packets. To do that, we have to add the following to the /etc/sysctl.conf configuration file and restart the computer.

Additionally, we also have to configure the firewall iptables to allow private virtual machines to communicate with the outside world by configuring IP masquerading. This makes actual requests from private IP addresses from virtual machines with an actual IP address of the host. We must add the rule to the NAT table's POSTROUTING chain and we must match only the IP packets with a source IP address set to 172.16.1.0/24.

After that the nslookup command should resolve to IP addresses in guest operating system, as shown below. 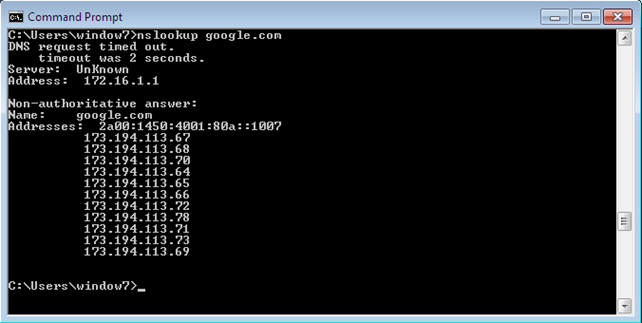 This isn't exactly how bridged networking works in Virtualbox, but it's a close approximation. The only difference is other networking devices not being able to connect to virtual machines with ease, since the virtual machines are actually using different IP address range, but even that can be solved. We can instruct our router DHCP to only give away IP addresses from 192.168.1.2-192.168.1.49 and instruct DHCP to give away IP addresses from 192.168.1.50-192.168.1.99. That way, the IP address range would be the same, but other networking devices would still need another routing entry, so they will know to redirect all packets destined to virtual machines to our host computer, which can forward them further.

At this point, I'm satisfied with the setup I have now and I won't dig any deeper, but I'm sure we can probably (with not much more work) define exactly the same bridged network as it's used with Virtualbox/Vmware.

In this article we've presented the basics of bridged networking in QEMU, which we must understand when trying to create a more advanced networking configuration for our guest virtual machines. We've come quite close to the actual bridged implementation as used with Virtualbox/Vmware by using the "-netdev tap" QEMU configuration option.

[3] Updating the guest initramfs with the virtio driver, http://www.linux-kvm.org/page/Boot_from_virtio_block_device#Windows_XP.

[5] Saying How To Mangle The Packets, http://www.netfilter.org/documentation/HOWTO/NAT-HOWTO-6.html.