How to Use Iptables

First we must mention that iptables is a Linux kernel firewall, which is why we can categorize it with the picture below:

If you read the mentioned articles then it should be clear what those categories in the above picture mean, and no further explanation of them is needed. Now we will move into our iptables discussion.

First, we need to install and start the iptables firewall:

In Ubuntu ufw service is used to start/stop the firewall. UFW stands for Universal FireWall, which uses the iptables command and allows us to easily manage our firewall on a Linux machine.

We already know that all packets coming to our machine must also pass through our iptables firewall, which determines if the packet is accepted or denied – to do that, iptables must look up its internal rules to decide what to do with the packet.

We can present the whole scheme of how a single packet travels from the client through the Internet to the server, which uses iptables to accept/deny the packet. In the picture below we can see that the client sends the packet to the server through the Internet. When the server receives the packet, it forwards it on to the Linux kernel, which passes it to the iptables firewall, which decides whether the packet should be accepted or denied. If the packet is accepted it is passed to the application that is waiting for that packet, otherwise it is dropped and the application will never see the packet.

We've presented the basic scheme of what happens when the server receives the packet, but we still don't know anything about the iptables internals. How does it work, how does it decide whether to accept or deny a packet?

First we must know that iptables firewall consists of three tables/queues:

Mangle Queue: used for mangling packets and to change Differentiated Services Code Point (DSCP) or Type of Service (ToS) and Time to Live (TTL) fields in the IP header. We can also append a special mark to the packet, which is later used to route packets differently depending upon the mark they have – this can be useful for bandwidth limiting. Thus this table is responsible for changing certain bits in TCP header.

Additionally, each queue has its chains. Let's name all of the chains for each queue:

A great job was already done with representing the queues, their chains and chain functions, so we won't try to reinvent the wheel. Rather we'll represent the picture of a table taken from the URI [1]: 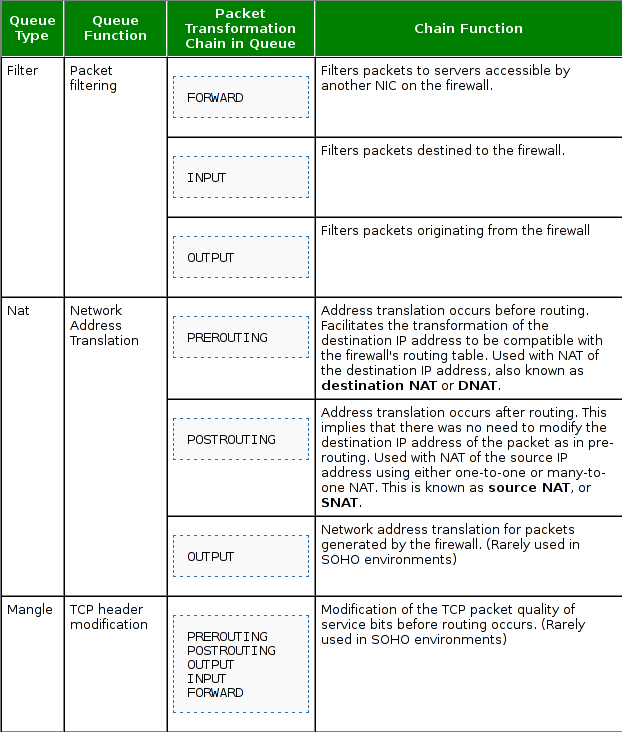 When specifying firewall rules we must specify the table and its chain for each rule.

To make this a bit clearer, let's take a look at the picture below – also taken from [1] – that demonstrates what happens when a packet from the Internet arrives at the firewall's interface on Network A and wishes to proceed to Network B:** **

When a packet arrives at Network A's entry point, it first goes through the Mangle-PREROUTING, which can modify the values in the TCP packet, but it usually doesn't. The packet then goes to Nat-PREROUTING, which takes care of address translation before the packet is routed anywhere else. Afterwards the packet is routed. At this point the packet can carry data for the firewall itself, or some other network. If the former, the packet must pass through the Mangle-INPUT, before being filtered by the rules in Filter-INPUT, which filters packets coming from the Internet. If a packet is valid and isn't denied in the filtering process, then it's handled over to the intended application on the firewall, which needs to reply. The reply is filtered by the Mangle-OUTPUT to change some fields in the TCP header and Nat-OUTPUT to do network address translation. After that the packet is handed over to the Filter-OUTPUT, Mangle-POSTROUTING and Nat-POSTROUTING before being sent on the Internet.

But if the packet is not destined for the firewall itself, but needs to go to the Network B, then it must go through filters Mangle-FORWARD, Filter-FORWARD, Mangle-POSTROUTING, Nat-POSTROUTING before reaching its destination.

The scheme in the above picture applies when iptables is installed on a separate machine, which serves as a firewall router that accepts all the packets coming from the Internet and going to the Internet. To represent that a little bit further, let's look at the picture below, which corresponds to the above iptables filtering packet flow: 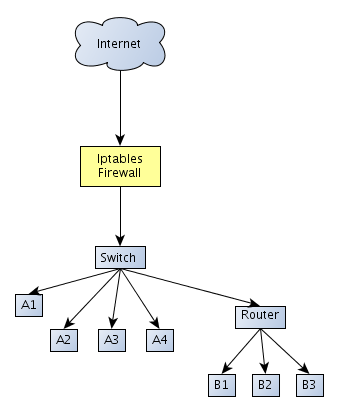 The iptables firewall is represented with a yellow node. The "Data for the firewall" decision node in the previous picture corresponds to the packets coming into the network destined for the iptables firewall itself, which must handle them. The Network B corresponds to all the other nodes in the network topology, namely: A1, A2, A3, A4, B1, B2, B3 as well as additional switch and router. 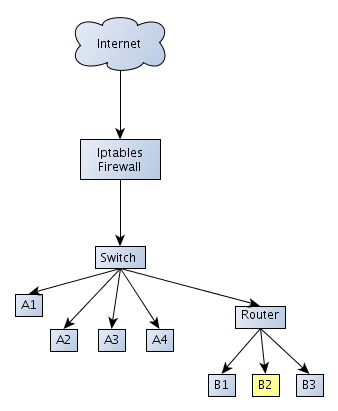 In this case the iptables is running on a server node B2. This is important, because most of the features of iptables firewall are not needed anymore. The Nat queue is used for network address translation, but do we need it in such cases? No, we don't, because how would the packet otherwise come to the destination server if the network address translation wasn't being done already – it's being done by the entry node router, like Linksys WRT54G. So in this case, we don't need to use the Nat queue when implementing iptables rules. Since we probably also don't want to modify TCP header values, we can omit the Mangle queue as well. This leaves just the Filter queue, which has FORWARD, INPUT and OUTPUT chains. But even the FORWARD chain is not needed, since the packets need not to be forwarded to another NIC, but are intended for current server node. This leaves just Filter-INPUT and Filter-OUTPUT chains for which we must specify filtering rules.

When a certain packet enters the iptables firewall, it's inspected against all applicable rules in different chains in a queue. Each firewall rule must determine what to do with the packet. Actions used on each packet are the following:

The help page of the iptables command is appended below and the important options are presented in bold font:

This will all become a little bit clearer with a few examples.

All the examples in this section will be specified as if the iptables firewall was implemented on a single server machine and not as a boundary firewall on the network. This is why we won't be needing the Nat and Mangle queues, but only the Filter queue – in which we should use only the INPUT and OUTPUT chains to filter packets.

To allow only ssh connections to the server, we need to execute the following command to add a new filtering rule into the INPUT Filter queue:

This rule will accept any TCP connection coming in on interface wlan0 from any IP address and any port number, but destined to port number 22 with any destination IP address.

After we've modified all the firewall rules we need to save them, so they will also be applied next time when the computer is rebooted.

The latter command can easily be added into the /etc/rc.local configuration file, which would restore the iptables rules upon computer reboots.