Before trying to analyze any kind of malware, we need to have a proper environment set up, so we can be most efficient and collect the most information from the malicious executable without getting ourselves infected. The best thing to do in such cases is have a virtual machine image ready for testing purposes. We can have multiple physical computers if we would like to test our malicious software, but it's easier to work with virtual machines. We can use any virtual machine software to set-up different virtual machines on a hardware virtualization technology system. But often, we don't have the means for an expensive hardware based solution, so we're stuck with our daily working computer, either PC or a laptop. This is why we'll take a look at what we can do with our laptop computer to set-up the environment for analyzing malware.

The first thing we need to understand when analyzing malware is that the malicious software programs usually spread through the Internet. This is why we don't actually want to give a malicious program the means to spread out onto the other machines in our LAN. To do that we must configure our virtual machine with limited access to the Internet. Every virtual machine has the options listed below under the Network configuration settings that we can use to give/take the Internet from s virtual machine:

- Internal Network: Very similar to the host-only network with one difference: in the internal network even the host itself cannot access the virtual machines, which are connected into an internal network.

Whenever we're setting up a new virtual machine, we need to install the operating system (usually Windows) without any personal information. We should choose some username and other information that isn't relevant to the information about ourself. We should also set up a read-only shared folder, so that any malware operating in the Windows guest virtual machine won't be able to compromise with the contents of that shared folder. There is a Virtualbox command VBoxManage which is used for the management of the virtual machines. Here we'll take a closer look at it, because we can use the same commands as those that will be presented as the basis for our automation script whenever we would like to automate a constantly repeating task. If we run the VboxManage command only, it will display all subcommands we can execute with that command. 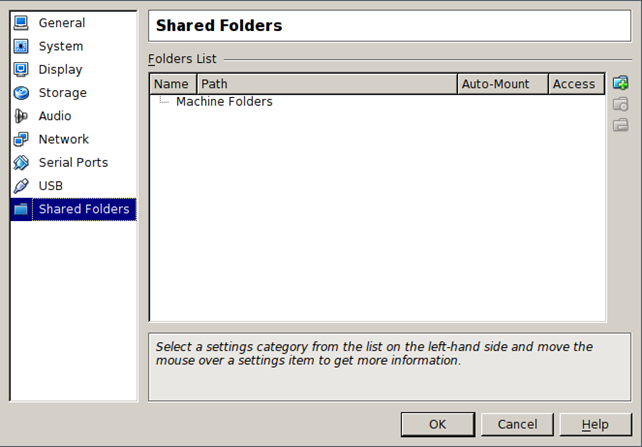 We can of course configure a new shared folder with a graphical user interface, but we want to automate it, which is why we'll rather use command line. First we need to display the names of our virtual machines. This can be done with the command below:

We can see that a virtual machine with a name Ubuntu exists. This is why we can enter the command below to create a new shared folder named Home that provides a read only access to the /home/eleanor/ directory:

Now the graphical user interface will also list the previously created shared folder as can be seen in the picture below: 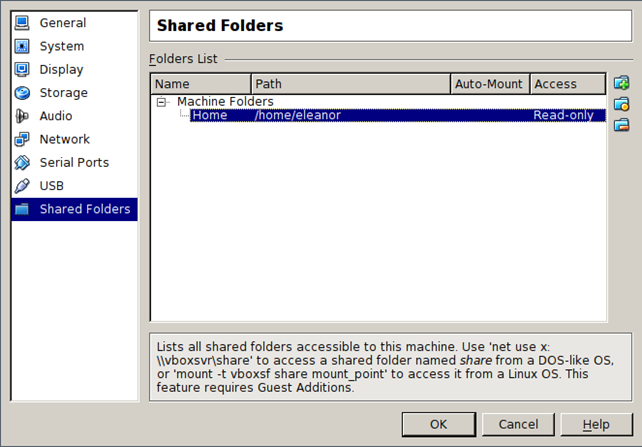 When booting up the Ubuntu virtual machine, we need to mount the created shared folder with the command presented below:

To take a snapshot with a command line tool, we would need to execute the command below:

There are various things we can do with the VBoxManage tool and there are quite a lot of other tools that we can use to mount the NTFS filesystem within the Windows .vdi VirtualBox image. But since we want to be using Virtualbox as well as VMWare in our testing, we don't want to develop different techniques to analyze .vdi (VirtualBox images) vs. .vmdk (VMWare images). We want to use a single technique that works with both products. We can do that by saving the virtual machines in VirtualBox as .vmdk images instead of .vdi images. After that we can use the VMWare tools to analyze the .vmdk images that are now being produces by VMWare as well as VirtualBox.

The picture below shows the step where we can choose between .vdi/.vmdk images when creating a new virtual machine: 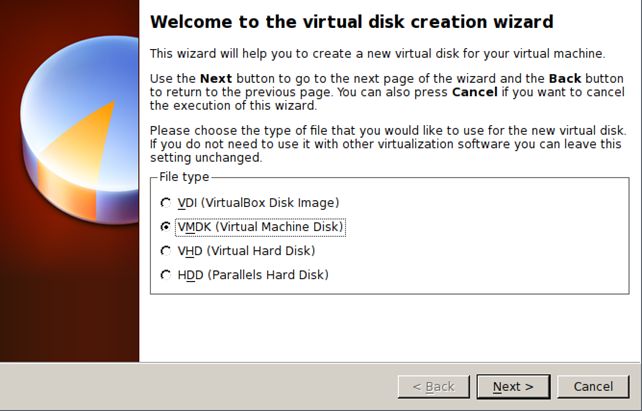 If we run vmrun by itself, we receive the help page of the tool notifying us about authentication flags as well as all supported commands (note that only a few commands are listed):

We need to monitor a malware program for the following things when we start it:

These are just basic things we need to know about every malware. And these are also things that can be automated. If we run a honepot network, it's reasonable to automate the first reconnaissance of the malware software program. This can give us basic information of what the malware is doing and how it is doing it. After that we need to start with the reverse engineering, which can tell us more about the details of how the malware does what it does.

We've seen how we can use the VirtualBox and VMWare environment to run the malware samples. We should first think about whether to allow the virtual machine to use the Internet or configure just the internal network, which we can do easily with the VirtualBox networking options. Afterwards we need to install the right operating system for the malware to be in a native environment; if we're trying to analyze Windows executable malware programs, we need to install a Windows operating system and run malware in there.

We can also use different Linux distributions that use Wine to run the malware executables (like ZeroWine Tryouts Linux distribution), but by running the malware in non-native environment anything can happen. Most of the time, we will be able to analyze the Windows malware programs even in a Linux environment, but we won't be able to analyze kernel rootkits and more advanced malware samples.

We've also seen that we can automate most of the first steps when analyzing malware: capturing the network traffic, determining the created/deleted files on the file system, determining the created registry keys, etc. These are also the first steps we need to take when analyzing malware, because they give us a basic knowledge about what the malware does and how it does it.