At that point, the booting of a computer is handed to the GRUB boot loader, which loads the grub.conf file and the kernel of the Linux system and then mounts the root partition, which in this case is /dev/sda3. The execution continues with the kernel image located on the /boot partition. The kernel is loaded and the execution is handed over to the Gentoo init process (with a PID number 1), which is already located on the system partition and is responsible for starting the entire system.

The init process takes care of everything the system needs to boot up successfully. One of the things it does is to start the required scripts, usually located in the /etc/rc.d/ directory. It must also mount the partitions that are listed in the /etc/fstab configuration file. Once everything is done, the login window appears, allowing us to log in to our operating system.[1]

BIOS and the MBR

We all know that when we turn on the computer, the BIOS first scans for devices, determines the amount of memory available, etc. After that, the BIOS must scan for bootable devices as configured in the BIOS settings, in that order. Typically, the BIOS finds the hard drive that contains the MBR (Master Boot Record), which must also contain the primary boot loader code.

Now we can use the all-powerful file command to display the contents of the MBR in a more readable format. We could read the hex bytes directly, but why should we? Note that we've used the tr command only to replace all the ';' characters with the new line characters to make the output easier to read:

We can see that the MBR image has knowledge of three partitions, which have the ID of 0x83 that identifies them as ext3 file system. We can see that none of the partitions is marked as active partitions, but that isn't absolutely necessary for the system to boot successfully (my system boots fine without this). But let's mark the first partition as bootable with the fdisk command:

The structure of the normal MBR record is as follows (the picture was taken from [3]): 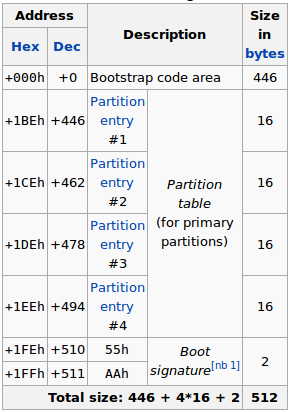 You can see that the first boot loader takes the first 446 bytes of the 512-byte MBR, which is 88% of the size. There are also four partition entries, which clearly gives us the idea why we can only set up four primary partitions in any partition editor. If we want to set up more partitions, we have to use logical partitions. The MBR entry also ends with the boot signature 0x55aa, as we can see on the picture above.

Notice that the signature of the MBR is indeed 0x55aa at the end of the dump.

The secondary boot loader is often GRUB or LILO for Linux and Bootmgr for Windows. Their job is to load the kernel and boot the operating system. The primary boot loader searches for the active partition and loads its VBR (Volume Boot Record) into memory. The VBR is a boot sector that contains the machine code for bootstrapping programs, usually operating systems stored in other parts of the device.[2]

But if we would like to install Grub on the VBR of a partition /dev/sda1, we should run the following:

Let's also take a look at the contents of the /boot/grub/ folder, which are listed below:

This gives us a clear indication that the boot loader must also support the file system that the system is using. In our case, since we're using ext3 file system, GRUB should be able to support it, because it must mount it and pass control to the operating system. GRUB supports the following file systems: ext2, DOS FAT16, FAT32, FFS, JFS, ReiserFS, MinixFS, UFS, XFS, VstaFS and Iso9660.

We've taken a look at how GRUB boots the Linux operating system, but we've also reviewed the role the BIOS has in the whole picture. We've seen that the BIOS is pretty important when it comes to booting the primary boot loader, as without it, it wouldn't be possible to boot the operating system from the hard drive in normal computers.