You can take a look at the previous article before reading this one. If you already understand the basics of IAT table, then you can skip the first article, but otherwise you should read that before continuing below.

Let's use the !dh command to dump the PE header. Below we can see that we've dumped the PE header that's located at the 0x00400000 virtual address. Note that we presented only the Import Directory entry, because we're interested only in that right now.

Let's dump the three structures contained in the Import Directory table. On the picture below we've calculated the address of the Import Table, which is 0x00400000+18000, and then we also added the relative offsets to the IMAGE_IMPORT_DESCRIPTOR structures. Since the size of each structure in an array is 0x14 bytes, we must add 0x14 bytes to the address to access the next element: 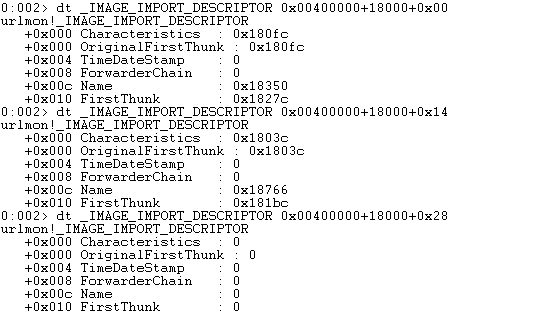 We can see that the array actually contains two elements and that the last one is set to zero to denote the end of the Import Directory. The names of both elements are denoted by the Name element in the IMAGE_IMPORT_DESCRIPTOR structure. The Name element holds the RVAs to the actual name of the library. In the next picture, we've dumped the memory at those RVAs as hex and ASCII representations:

Notice that we've actually printed the names of the loaded libraries, the msvcr100dl.dll and kernel32.dll? This proves that the executable is using the imported functions from those libraries.

The IMAGE_THUNK_DATA structure contains the element AddressOfData, which points to the IMAGE_IMPORT_BY_NAME structure. Let's present that structure again for clarity:

The first type bytes are Hint, while the rest of the bytes, until the first NULL byte, are part of the Name element. Because of this, the actual name of this function is _crt_debugger_hook. We can also use the da command to dump only the ASCII characters, but we have to add an additional 0x2 bytes to the address to jump over the Hint element. We can see the same string dumped on the picture below:

Notice that the last element is NULL element 0x00000000, which terminates the array. The rest of the dwords are RVA addresses to the IMAGE_THUNK_DATA structure. We can see that it would take a lot of work to traverse the entries manually, so we'll just write a simple script that will do it for us. Let's first check if the current expression evaluator is set to MASM. We can do this with the .expr command:

Whenever we want to execute the script, we need to use the following command:

I've coded a script that traverses the OriginalFirstThunk array and prints all the names from that array. The script can be seen below:

There's no need to say that the script only works if the base address of the PE header is 0x00400000; if we would like to have a more versatile script, we only need to make small changes to find the PE header base address dynamically. We didn't do this in our case, since it's not important for this exercise.

After that, we have a for loop which counts from 0 to 1000, increasing the counter by t 4 and executing the for loop body each time. In the loop body, we calculate the address of each element in the OriginalFirstThunk array and read the value from that address. If the address contains the value 0, then we've come to the end of the array and we terminate the loop. Otherwise, we take that value and add 0x400002, which constructs the whole address to the actual null-terminated ASCII name. Then we print that value to the output and repeat the loop.

Let's see what happens when we run the script. We saved the script into C:scripts directory as importnames.wds script, but the extension can be anything we like, even.txt. We're passing one argument 0x180fc to the script, which is the RVA to the OriginalFirstThunk.

Let's also dump all the names from the FirstThunk array in the msvcr100d.dll library, which has a RVA of 0x1827c. In order to do that, we have to change the script a little bit, because the OriginalFirstThunk and FirstThunk don't actually use the same data structures. The new script is very similar to the previous one and can be seen below:

We won't explain the script in detail, since it's very similar to the previous one. The only difference is the else conditional body, where we print the read value to the stdout, where in the previous case we printed the value pointed to by the current value and there was one more pointer in the hierarchy.

When we run the script, the following will be printed to the screen:

Notice that we passed the RVA of the OriginalFirstThunk 0x1827c to the new script. The script printed the same number of elements as before, but now the function addresses were printed, instead of the function names in the previous script.

Let's verify that the printed address actually belongs to the function we've identified. The last element printed in both cases is "getchar" and "1025f660", which means that the getchar() function must be located at address 0x1025f660. We can check whether this is true by simply using the u command. The picture below shows us that our script works and that we've correctly identified the address of the getchar() function:

Let's also verify that the function addresses are correct by checking whether the last element matches.

The address 0x7c810cd9 matches the CreateFileW function, which means that our scripts work as intended.

If we now dump the PE header with the !dh command, we'll see that the RVA to the Import Address Table Directory is 0x181BC, which is exactly the RVA of the kernel32.dll's FirstThunk.

This proves that the IAT table must be traversed through the Import Directory structures as we saw in this tutorial. If we dumped the contents of the memory at IAT (RVA0x181BC), we would see that we're actually accessing the same functions that we already identified.

The IAT table is used to support dynamic linking, which needs to be done when the application is run. Since the application uses functions from standard libraries, we must write them into the IAT table, so that the operating system knows which libraries to load into the process's address space when the process is being executed. Alternatively, we could use run-time linking, in which case the IAT table won't be necessary, because we have to load the library and execute its functions at run-time.