The Sysenter Instruction and 0x2e Interrupt

In this article, we'll present a couple of examples where we'll be using the 0x2e int instruction to interrupt the kernel and call some interrupt service routine. We'll also be using the sysenter instruction to do the same. The basic idea is presenting both methods of transferring the control from user mode to kernel mode by showing an easy to use example.

Let's first present the address where the IDT table is located in memory. We can do that by printing the value stored in the IDTR register. On the picture below we used the "r idtr" to get the address of the IDTR table, which is 0x8003f400. Then we dumped the memory at that address, which printed the interrupt descriptors.

Rather than dumping memory with the dd command, we can use the !idt command to display the whole IDT table in a more transparent way:

When dumping the memory with dd command, two columns actually correspond to the single IDT entry on the image above (this is because each IDT entry is 8 bytes long). If we look at both of the pictures carefully, we can see that the same IDT entries have been presented. But we'll be using the 0x2e, so it's best to present it.

At first, I had a thought that I should call some ntdll library function, which would automatically interrupt the kernel in some way. But while experimenting with this feature, the first thing that was bothering me was working my way through the system call function layers in order to get to the actual int instruction. This required several steps and jumps to get from the place where I called the function to the actual point of interest, the int instruction. And then again, the sysenter instruction was called, not the int instruction, which was an additional problem. It was at that time that I decided that I would just code my own assembly instructions that would initiate certain system calls.

Okay: what does all of this mean? It means that if we store the number 0x19 in the register eax before calling the int 0x2e instruction, we'll essentially be calling the NtClose function in kernel.

Let's take a look at a simple example that we'll be using to present the system call being called via the int 0x2e interrupt. The source code of a simple C++ program can be seen below:

The first thing that we need to do is to compile and run the program, after which the Windbg will catch the exception as follows:

The execution of the program is stopped at the "int 3" instruction. If we disassemble the instructions at that address, we can see the following:

Also notice that we're in kernel mode, since we're executing the instruction at address higher than 0x80000000? Let's present the instructions that will be executed in the KiSystemService function: 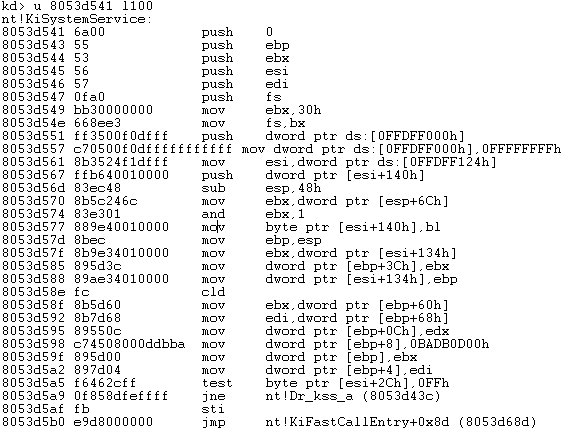 If you look carefully, you can see that this is just an initialization code and the value in the eax register isn't used anywhere. At the end of the code, there's a jump to the KiFastCallEntry function (at offset 0x8d). If we also disassemble the instructions at that address we can see the following: 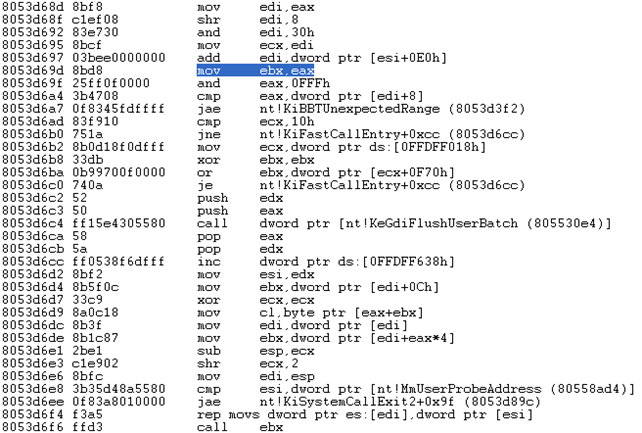 On the picture above, we can see the value in register eax being used, which means that the system call number is being inspected in some way.

Previously, we had to put the system call number into the eax register and invoke the "int 0x2e" interrupt to call specific function in kernel. But with sysenter instruction, we can also invoke the same function in kernel, just faster. Let's take a look at how it works.

Let's present the example that we'll be using to present the sysenter instruction internals. The program is written in C++ and can be seen below:

The program is very simple: all it does is creates a file C:temp.txt if it doesn't already currently exist and writes some data to it. Then it closes the file and quits. If we compile and run the program, the following will be displayed in the window console:

There is also a new file C:temp.txt created with the following contents:

We can see that the program above does exactly what we want it to do. Now let's add the "__asm{ int 3 };" code block at the beginning of the program, which will cause the interrupt to be generated and the program execution will pause. Actually, it's better if we add this instruction right before and after the CloseHandle function call, so we can start inspecting that function immediately.

When we run the program, the Windbg will catch it as presented on the picture below. We've also disassembled the code at the breakpoint address 0x004114d6. Notice the two "int 3" instructions, which embed the CloseHandle function call? 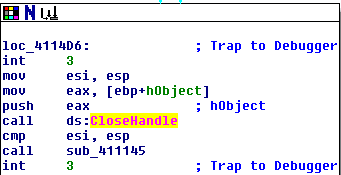 When we enter the CloseHandle function, we'll be executing the following code:

Eventually the execution will lead to the NtClose, where the file also needs to be closed when we're done working with it. This code is presented on the picture below:

And at the call instruction on the picture above, we'll jump to the KiFastSystemCall function, as presented below:

Since the sysenter instruction is located at the address 0x7C90E512, we can set a breakpoint at that address as follows:

The 176 MSR register specifies the linear address where we'll jump to when executing the sysenter instruction. We can see that we'll jump to the address 8053d600, which is located in kernel mode. If we disassemble that address, we can determine that we're actually talking about the KiFastCallEntry function, as can be seen below:

If we set a breakpoint on that location and execute the t command, we can see that the breakpoint is immediately hit. Here's the first difference between the "int 0x2e" and the sysenter instruction: when using the "int 0x2e" interrupt, we jumped to the offset 0x8d of the KiFastSystemCall function, while with sysenter we're jumping to the beginning of that function.

We can see that both 0x2e interrupt as well as the sysenter instruction led to the same point in the kernel mode, which means that they are really used for the same thing, but the actual procedure of doing it is a little different. In the next article we'll take a look at what happens in greater details.