Each process started on x86 version of Windows uses a flat memory model that ranges from 0x00000000 - 0xFFFFFFFF. The lower half of the memory, 0x00000000 - 0x7FFFFFFF, is reserved for user space code. While the upper half of the memory, 0x80000000 - 0xFFFFFFFF, is reserved for the kernel code. The Windows operating system also doesn't use the segmentation (well actually it does, because it has to), but the segment table contains segment descriptors that use the entire linear address space. There are four segments, two for user and two for kernel mode, which describe the data and code for each of the modes. But all of the descriptors actually contain the same linear address space. This means they all point to the same segment in memory that is 0xFFFFFFFF bits long, proving that there is no segmentation on Windows systems.

Let's execute the "dg 0 30" command to display the first 7 segment descriptors that can be seen on the picture below:

Notice that the 0008, 0010, 0018 and 0020 all start at base address 0x00000000 and end at address 0xFFFFFFFF: they represent the data and code segments of user and kernel mode. This also proves that the segmentation is actually not used by the Windows system. Therefore we can use the terms"virtual address space" and "linear address space" interchangeably, because they are the same in this particular case. Because of this, when talking about user space code being loaded in the virtual address space from 0x00000000 to 0x7FFFFFFF, we're actually talking about linear addresses. Those addresses are then sent into the paging unit to be translated into physical addresses. We've just determined that even though each process uses a flat memory model that spans the entire 4GB linear address space, it can only use half of it.This is because the other half is reserved for kernel code: the program can thus use, at most, 2GB of memory.

Every process has its own unique value in the CR3 register that points to the process' page directory table. Because each process has its own page directory table that is used to translate the linear address to physical address, two processes can use the same linear address, while their physical address is different. Okay, so each program has its own address space reserved only for that process, but what about the kernel space? Actually, the kernel is loaded only once in memory and each program must use it. This is why each process needs appropriate pointers set-up that do just that. It means that the PDEs stored in the page directory of every process point to the same kernel page table.

We know that the kernel's memory is protected by various mechanisms, so the user process can't call it directly, but can call into the kernel by using special gates that only allow certain actions to be requested of kernel. Thus, we can't simply tell a program to go into kernel mode and do whatever it pleases,because the code that does whatever we want is in user space. Therefore,the programs can only request a special action that's already provided by a kernel's code to do it for them. If we would like to run our own code in kernel memory, we must first find a way to pass the code to the kernel and stay there. One such example would be the installation of some driver that requires kernel privileges to be run,because it's interacting more or less directly with the hardware component for which the driver has been written. The user processes can then use that driver's functionality to request certain actions to be done: but only those that have been implemented in the driver itself. I hope I made it clear that the functionality run in kernel mode is limited to the functionality of the code loaded in kernel mode, and thus the code from user mode is not allowed to be executed with kernel privileges.

Let's take a look at an example. On the Windows system being debugged by Windbg, I started Internet Explorer and Opera to analyze their memory space. After the programs have been started, I run the "!process 0 0" command to get the basic information about all the processes currently active on a system. The result of the command can be shown below where we've only listed the two processes in question (not all of them):

The DirBase element above is actually the value that gets stored in the CR3 register every time a context-switch to a particular process occurs. That value is used as a pointer to the page table directory that contains PDEs. The page directory table of process opera.exe is stored at physical address 0x094c01a0, while the page directory table of process IEXPLORE.EXE is stored at physical address 0x094c0200. Because the 0x00000000 to 0x7FFFFFFF linear address space is used by the program and not the kernel, the program will use the first half of the PDE entries in its page directory, while the kernel will use the second half. Since, if PAE is disabled, each program has 1024 PDE entries, 512 of them refer to user space memory, and the other 512 refer to kernel space memory.

The !process commands above have been used to get the pointer to the process's EPROCESS structure in memory. With the .process command, we can set the context to the current process. This is mandatory step if we would like to run some other commands that require us to be in the process's context in order to be run successfully. To switch to the context of the iexplore.exe process, we have to execute the ".process 81f799f8" command as can be seen below:

There was some warning message about forcedecodeuser not being enabled. The problem with this is that the context switch won't occur to the requested process. To solve that we need to enable the forcedecodeuser with the ".cache forcedecodeuser" command. The output from that command can be seen on the picture below:

Notice that we've first enabled the forcedecodeuser, and then run the .process command to switch to the context of the iexplore.exe's process? This time there was no error message and the context-switch actually occurred. 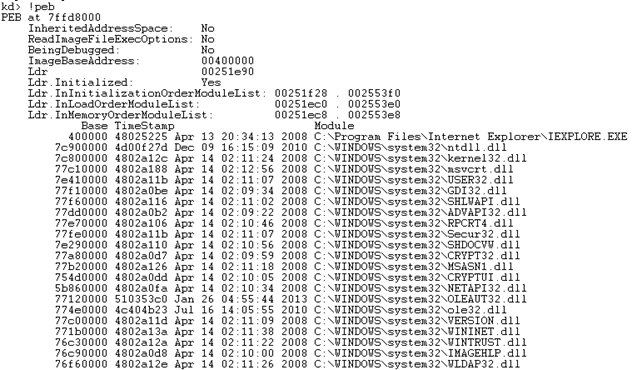 Notice that all the loaded DLLs that the program uses have been loaded in the user space (keep in mind that we didn't present all the DLLs because the iexplore.exe uses too many of them to be presented in a sane manner). All the loaded DLLs also have their path displayed, which makes it very easy to find them on the hard drive. Let's also present the second part of the output, which has long lines, so they can't be presented here. Luckily the windbg has a "word wrap" functionality that can be enabled by right-clicking on the window and selecting "Word wrap" as can be seen below: 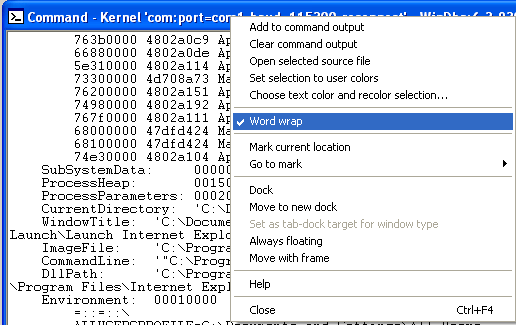 Notice that the "Word wrap" is enabled, which means that the lines will only be as long as the window's width.If lines are longer they will be wrapped and put into the second line. Let's now present the second half of the output from running the !peb command:

There are quite many information available on the picture above, like the address of the process heap, the process parameters, the command line used to invoke the program, the path where to search for DLLs, etc. Also all the environment variables of this process are shown, but only the first three are presented for clarity.

Let's now download the Sysinternals Suite and run the vmmap tool, which will ask us to select a process when launching. We can see that on the picture below, we must select the IEXPLORE.EXE to view it's memory: 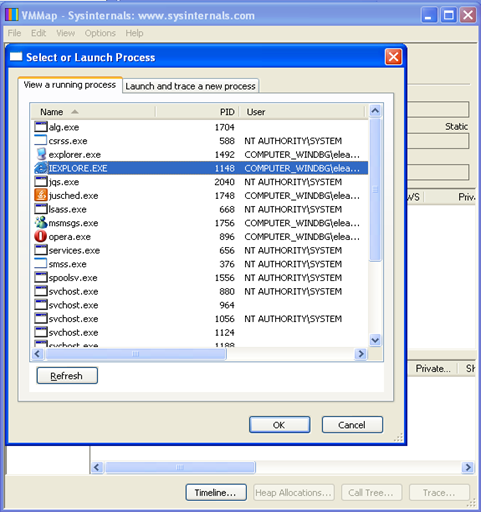 The vmmon will then analyze the memory and present us with the statistics about which memory is used for heap, stack, data, etc. This can be seen on the picture below: 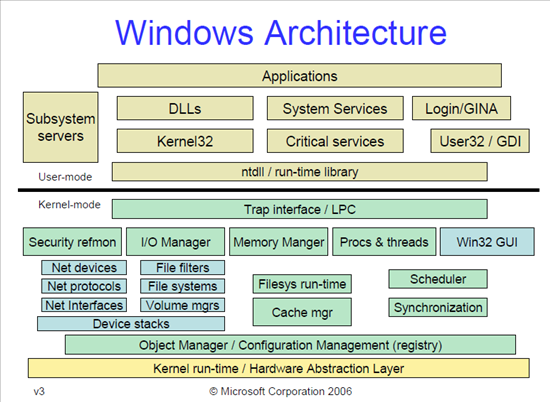 Let's present a picture about Windows Architecture taken from [2]:

On the picture above we can see the HAL (Hardware Abstraction Layer), which is the first abstraction layer that abstracts the hardware details from the operating system. The operating system can then call the same API functions and the HAL takes care of how they are actually executed on the underlying hardware. Every driver that is loaded in the kernel mode uses HAL to interact with the hardware components, so even the drivers don't interact with hardware directly. The kernel drivers can interact with the hardware directly, but usually they don't need to, since they can use HAL API to execute some action. The hardware abstraction layer's API is provided with the hal.dll library file that is located in the C:WINDOWSsystem32 directory as can be seen below:

The rest of the system kernel components are provided by the following libraries and executables [3]:

The programs can use Windows API (Win 32 API) to implement the needed actions. But the WinAPI uses the described DLL libraries underneath.

Right above the kernel mode is the user mode, where the most important library is ntdll.dll.Thatcan be used as an entry point into the kernel if some process needs services of the kernel.

If you're interested in knowing all of the system libraries that a kernel uses, you can run the "lm n " command in Windbg, which will list all of the libraries used by the kernel mode.

We can see that there are a lot of loaded libraries that kernel mode uses to provide services to the user application and to keep track of everything the operating system must do.