In the previous tutorial, we've seen how one would go about booting the Linux operating system by using GRUB. We presented the basic overview of the booting process in Linux and we also mentioned that the boot loader must support the file system the root operating system is installed on.

Let's take a look at the MBR where the Windows boot loader resides. We can do this by booting off some Linux live CD on the system where Windows is installed. We should install the system to get to the live Linux environment, where we can input commands. Since the MBR was populated by Windows, we can issue the dd command to dump the whole MBR from the hard drive.

Below, we booted the Ubuntu live CD and copied the MBR into the /tmp/mbr.bin file with the dd command, then printed its contents with the file command:

We can see that the boot loader is a Microsoft Windows XP MBR and there's only one active bootable partition on the whole hard drive.

The first boot loader must be able to read the NTFS file system in order to mount the right partition and load the appropriate program that will boot the rest of the operating system. There are two mechanisms in place that controls how the Windows system can be booted:

Keep in mind that the MBR as well as the VBR boot code executes in real mode as 16-bit instructions, so there are no protection mechanisms in place. Also the NTLDR or the Bootmgr must execute as 16-bit executables, because the switch to protected mode hasn't occurred yet and it's their job to set up the necessary data structures and switch to the protected mode. After the protected mode has been loaded, another boot manager is loaded into memory, which actually boots the Windows operating system.

Since we're in Windows XP, the old approach of booting the system is being used. This is why the NTLDR program is used to switch to the protected mode and execute the protected mode boot manager. It's a system file so it's hidden by default, which is why we must change IE settings to also show hidden system files. The NTLDR boot loader can be seen on the picture below:

The code in the MBR or the VBR must find the NTLDR file in the root directory, copy it into memory and execute it. Once the NTLDR is executed, it must access the file system on the boot drive to access the files that it needs.

It first tries to find the hibernation file hiberfil.sys, which can be used to resume the system. If the hibernation file is not found, it reads the boot.ini file and prompts the user for the boot menu that presents the boot options. After that, the Ntdetect.com file is executed, which identifies information about the computer's hardware. Finally, the Ntoskrnl.exe file is executed, which is the kernel of the Windows system.[1]

We've mentioned that NTLDR reads the boot.ini file. The picture below shows the contents of this file:

We can take a look at all the options we can enter into the boot.ini configuration file here: [1].

When booting the Windows 7 operating system, Bootmgr is loaded and executed, instead of NTLDR. Let's first dump the MBR record that Windows 7 has installed on the hard drive. On the picture below, we can see the contents of the MBR, dumped with dd and find Linux commands:

Notice that there are two partitions and that the first one is active: this is the partition where the Bootmgr is located.

In newer versions of Windows, NTLDR is not used anymore, only Bootmgr. Let's take a look at the contents of the system drive where the booting information are read from:

Notice that the Bootmgr file is present on the picture above? This is the file that gets loaded into memory and executed, which boots the Windows operating system. Keep in mind that Bootmgr is still a 16-bit program, which must be used to switch from real to protected mode. The whole booting process of newer versions of Windows operating systems can be seen on the picture below, which was taken from [2]:

The Bootmgr must also load the configuration files located in the D:Boot directory. The picture below lists all the files in it: 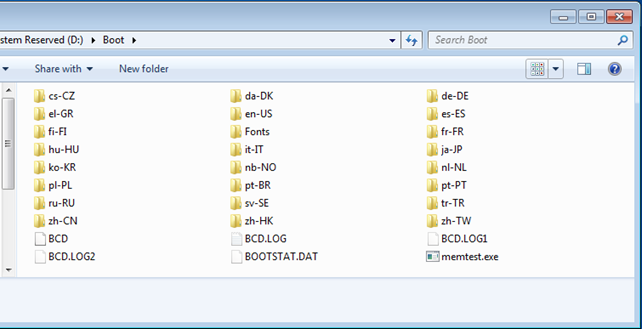 In Windows, we can use the tool bcdedit.exe to manage the booting process. The picture below shows the Windows boot manager and Windows boot loader, which are displayed if we run the bcdedit.exe program by itself without arguments: 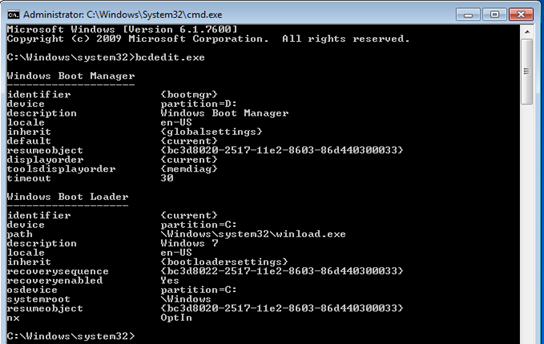 We've seen that the Bootmgr will load the winload.exe program, which is located in the C:WINDOWSsystem32 directory. A lot of interesting stuff also happens when the system is being booted, like the ntoskrnl.exe and hal.dll files being loaded into memory, other system DLLs also being loaded, services being started, etc.

Let's configure the boot log where all the actions that will happen will be logged during the booting process. To enable the boot log, we need to execute the following command:

Let's restart the system and check out C:WINDOWSntbtlog.txt, which should contain all the actions that happened during the operating system booting. Let's present the beginning of the file:

If we search the log file for the "Loaded driver" string, we will be able to identify all the loaded drivers and libraries.

Let's also present some of the libraries that get loaded during the booting of the system:

At the bottom of the picture, you can see the actual entry where the DLLs are accessed: through the KnownDLLs fieldLooking through the DLLs on the picture above, we can see that most of the libraries are well known and we know what they are used for, like gdi32.dll, which is used for graphical user interface, kernel32.dll, ole32.dll, etc.

We've also already mentioned that at some point of the booting process, the control needs to be passed to the ntoskrnl.exe, which is the Windows kernel. As you may imagine, the kernel needs to do a lot of things before the login screen can be presented to the user. While the boot loader enables the protected mode, the kernel must set up all the data structures that will be used by the system, like page tables. The kernel must also configure the interrupt table for each processor, along with a lot of other things.

One of the processes started during the booting process is also the wininit.exe, which is the Windows Init process. This process in turn starts three other processes:

The picture below presents a few processes, sorted from lower to higher process ID numbers: 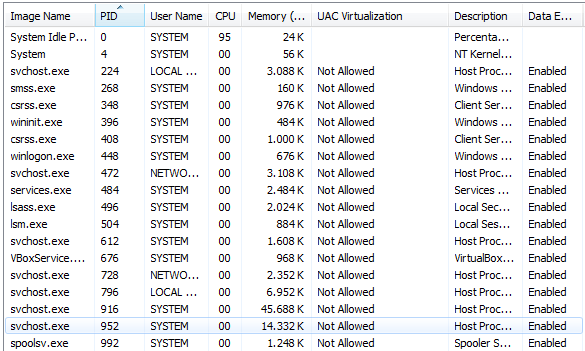 Notice that services.exe, lsass.exe and lsm.exe are started and have PIDs close together, which means they must have been started at approximately the same time.

In this article, we've seen the basic things that happen when the Windows operating system is booted. First, we talked about the old approach still used in older Windows operating systems that use the NTLDR file to boot the system. The method used in newer versions of Windows operation system is the Bootmgr, which can be managed with the bcdedit.exe executable. We've also briefly looked at the libraries and services that are loaded into memory and started during the boot process.