Introduction In this tutorial, we'll introduce a few basic tools that we need to have available when doing kernel debugging on Windows. Besides that, we'll present Windows debuggers that can help us with debugging Windows programs and Windows internals. We'll also take a look at how we can go about symbols, which are an important aspect of kernel debugging. At the end, we'll take a look at the command we can use in the user or kernel-mode debuggers that come with windows debugging tools.

Let's present a few of the tools that we absolutely need when kernel debugging in Windows. The needed tools are as follows:

But if you're using older versions of Windows, you must install the WDK 7.1.0, which we can download from the http://www.microsoft.com/en-us/download/details.aspx?id=11800 URL, where the download link looks like this: 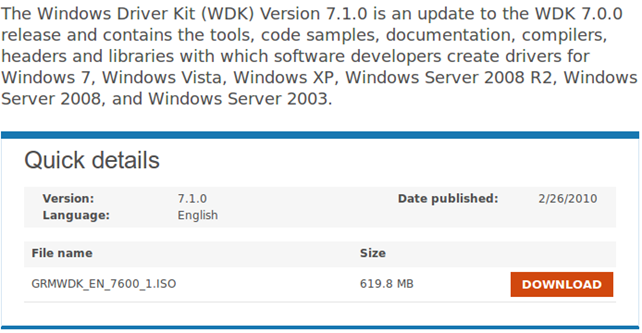 Upon downloading the ISOimage, we must mount it and start the KitSetup.exe executable. On the picture below, we can see a step in the installation where we can choose what would we like to install; notice that we can also check the Windows Debugging Tools? 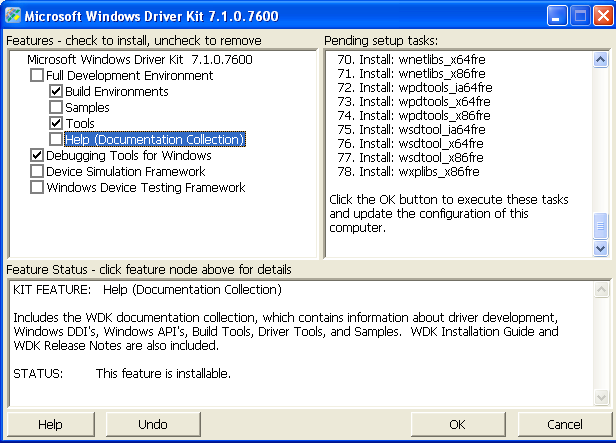 During the installation all the files will be copied to the C:WinDDK7600.16385.1 directory.

But besides the tools listed above, we still need the most important tool, which is the debugger, either user or kernel-mode debugger. Normally, it's good to have both kinds of debuggers at our disposal. Let's take a look at a simple "Hello World!" example in Visual Studio. The code below is a C++ code compiled in Visual Studio that prints the "Hello World!" string to the console windows anD quits:

The Debug directory contains the files presented on the pictures below:

It's not hard to recognize that the helloworld.exe executable is the compiled versions of the above source code. But we can also see a file named helloworld.pdb in the same directory: that file holds the symbol information about the executable. Then we can use a tool like symchk that is able to check which symbols (if any) have been exported for the particular executable. If we run the symchk tool without any arguments, the following will be displayed to the console windows (note that the output has been shortened for brevity):

From the instructions above, we can immediately recognize that only the filename is the required argument, which we must pass to the symchk command. If we won't specify the /s option, the value in the _NT_SYMBOL_PATH will be used instead. If that environment variable is not set, then the /s will use the default option "SRV*%SYSTEMROOT SYMBOLS* http://msdl.microsoft.com/download/symbols". In our case, we have a standalone PDB file, which we must specify when using the /s option. On the picture below, we've passed the current directory to the /s argument (this is the directory where the PDB file should be located), and we used the /ps argument to check whether the PDB files have been stripped of debugging information:

We can see that the helloworld.pdb is not stripped, which means that it still contains the symbol information.

The picture below shows us how we can set such environmental variables: 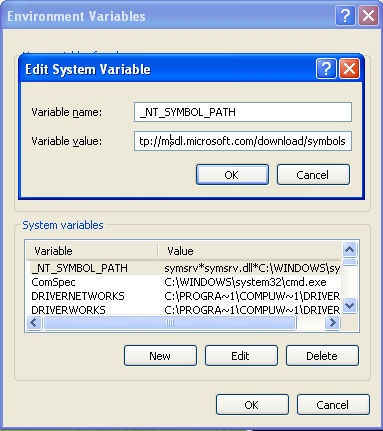 There are various debuggers that are contained in the Windows debugging tools and are listed below:

If we've installed the WDK, then all the debuggers are located in the C:WinDDK7600.16385.1Debuggers directory, which we must add to the PATH environmental variable if we would like to invoke them directly in cmd.exe. On the picture below, we can see the presence of all the debuggers listed above:

To start debugging some program with the cdb.exe or ntsd.exe debuggers, we have to use the following command to do it:

If we load the previous helloworld.exe program, we can list information from it. Let's first list all of the modules the program has loaded with the "x *!" command:

We can see that the helloworld executable was loaded along withthe following modules: msvcr100d, kernel32 and ntdll. There's also another command that can print all the loaded modules, the lm command.

We can see that basically the same information was presented by both commands.

To list all of the symbols from the helloworld executable, we can execute the "x helloworld!*" command:

We can see that the first part of the symbols are presented on the picture above (note that all are not presented for brevity). Let's see if we can print some information about the printf symbol residing in the helloworld module:

We can see that the address where the printf function is used is at 0x0041140, but that isn't the actual address directly linked to the printf call that we used in our source code. The <no type information> means that the debugger cannot determine whether the symbol is a function or a variable, but we know it's a function in this case. To disassemble the assembly code at that address, we can use the d command like this:

After that, we can run the g command to run the program. The program will stop the execution when the specified address will be reached and we'll have a chance to look around. One thing that can interest us at that point isthe registers that can be printed with the r command.

There are also other commands that we need to be aware of: the d* commands. They are used for printing the contents of memory to screen. There are multiple commands that start withletter 'd' and are presented below:

Keep in mind that there's a very good reference for commands that we can use with Windows debuggers available at this URL address: http://www.windbg.info/doc/1-common-cmds.html. I'm constantly using it as a reference.

In this tutorial, we've seen the basic tools that we need to have installed when debugging Windows applications or Windows kernel. These tools are WDK, SDK, symbol files and debugging tools. We need to keep in mind that we can debug Windows without those tools, but we'll have a hard time doing it; so why should we complicate our lives if we don't have to? Isn't it better to just download the tools and use them rather than spending time doing something that should be rather easy (if we had the tools installed)?

Let me give you an example why you should have the symbol files installed: when doing debugging, you're probably not very happy when only addresses and hexadecimal numbers are being displayed to you, because they don't mean anything to us. Rather than that, we're used to work with strings (the symbols), which can help us understanding the underlying assembly code much faster and with greater accuracy.

If you're serious about kernel debugging, you should really invest the time to download and install the tools presented above, because they can be of great help. You should do the same if you're a hardcore driver developer, but if you're developing a simple, user-mode software that doesn't have to interact with the kernel, then you probably don't want to spend the time installing and learning about the tools above. But if you do it nevertheless, it can be of great help in understanding Windows internals, which can help you in development engagements to come. It's never a bad thing to know how to debug the kernel.