When trying to protect memory from being maliciously used by the hackers, we must first understand how everything fits in the whole picture. Let's describe how a buffer overflow is exploited: ** **

We must mention that if only one of the above conditions is not true, then the buffer exploitation will fail and we won't be able to execute our shellcode. This is an important observation because, if we're not able to satisfy every condition, the exploit will not work and the attack will be prevented. Next, we'll discuss the techniques we can use to prevent one (or many) of the above conditions from being satisfied by malicious hackers. Let's mention it again: If we're able to prevent hackers from satisfying at least one of the above conditions, then the exploitation of the buffer overflow will fail. This is why we'll take a look at methods of preventing each of the conditions from being satisfied. Let's not forget about the conditions where the buffer is very small and we can't actually exploit the condition in one go, but we must send multiple packets to the target in order to successfully exploit it;; one such technique is the egg-hunting exploitation technique, where we first inject some malicious code into the process's memory, which contains an identifiable group of bytes often referred to as an egg. After, that we need to inject a second (and possibly a third, fourth, etc.) input into the process, which actually exploits and overwrites the return EIP address. Thus, we can jump to the first part of the shellcode, which must find the egg in memory and continue the execution from there – this is the shellcode we've inputted into the process's memory with the first packet. We must keep in mind that in all of those special cases, the above conditions must still hold, which is also the reason we'll be examining them in more detail later in the article.

I guess we can also mention that none of the exploitation techniques would be possible if programmers would write safe code without bugs. But because life is not perfect, bugs exist and hackers are exploiting them every day. Because of that, whitehat hackers have come up with various ways to prevent the exploitation of bugs even if they exist in the code: some of the techniques can be easily bypassed but others are very good at protecting the process's memory.

Techniques for Protecting the Finding of Input Shellcode Address

When exploiting a service, we're sending input data to the service, which stores it in a buffer. The input data usually contains bytes that represent native CPU instructions. The buffer where our input bytes are written to can be located anywhere in memory:

Currently, the following methods prevent us from guessing the right input address, which we can use to overwrite some important data structure that enables us to jump to our shellcode. These methods are:

We need to overwrite the return address EIP or some other similar structure to jump to some instructions in memory that can help us eventually jump to our shellcode. This is why we need to overwrite the structure with something meaningful, like an address that can take us to our shellcode and execute it. There are possibly infinite possibilities of how we can do that, but let's list just a few of them to get an idea how this can be done:

We can use the following techniques to defend the data structures (summarized from [1]):

We've already mentioned that DEP allows the pages in memory to be marked as non-executable, which prevents the instructions in those pages to be executed (usually the stack and heap data structure are used with DEP enabled). If the program wants to execute code from the DEP-enabled memory page, an exception is generated, which usually means the program will terminate. The default setting in a Windows system is that DEP is enabled. To check whether DEP is enabled, we must look into the C:boot.ini configuration file and look at the /noexecute flag value. The values of the /noexecute switch can be one of the following values:

We can see that with OptIn and OptOut options, we can dynamically change whether the DEP is enabled or disabled for certain user applications. We can do that with the use of the SetProcessDEPPolicy system function. The syntax of the function is presented below (taken from [2]):

The dwFlags parameter can be one of the following:

We can enable/disable DEP for certain user applications if we right-click on My Computer, then go to Advanced and click on Performance Settings – Data Execution Prevention, we see picture below: 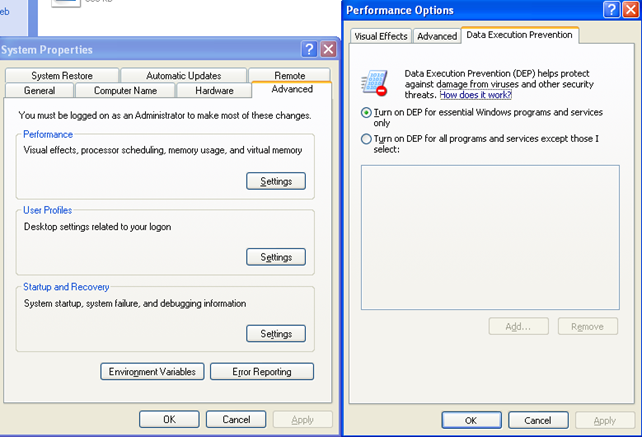 Currently the OptIn is set in the C:boot.ini, which resembles the options specified above. If DEP was disabled, the options above would be grayed out: they are only enabled when OptIn or OptOut is being used. Let's change the DEP configuration option to OptOut in the Performance Options window and also add an exception so that iexplore.exe won't have DEP enabled. We see the picture below:

Once we click on the Open button, the IEXPLORE.EXE will be added to the list of user applications that have DEP disabled, which can be seen in the picture below: 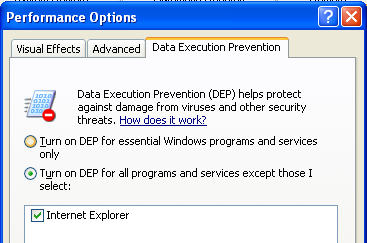 Once we try to save the settings, a warning will pop-up notifying us that we must restart the computer in order for changes to take effect:

The Windows systems use PE headers to describe the executable files. One of the elements of the PE header is the preferred load address that is stored in the ImageBase element in the optional header. The address stored in the ImageBase is the linear address where the executable will be loaded if it can be loaded there (by default this address is 0x400000). 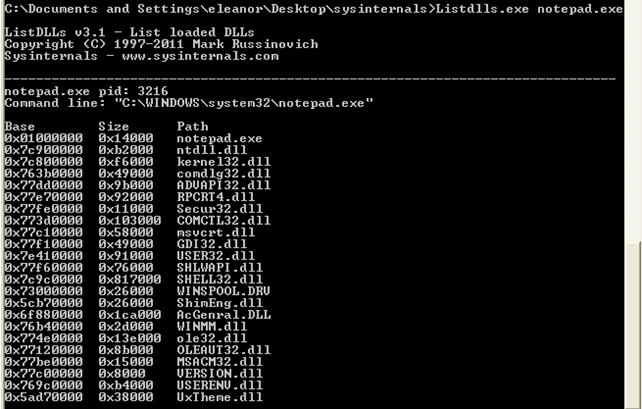 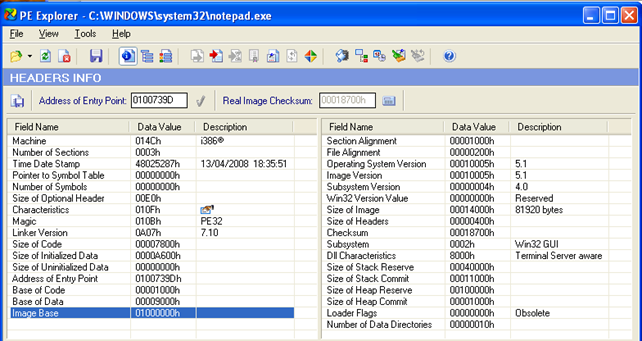 Now we need to restart the system and use the listdlls.exe program again to list all the DLLs loaded in the notepad.exe program. The result can be seen in the picture below: 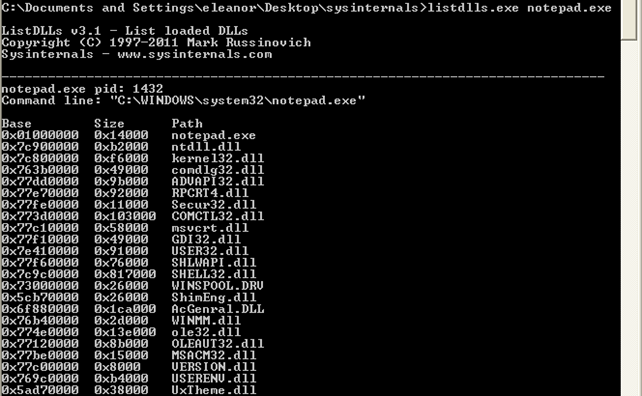 Notice that the base address of the notepad.exe and every corresponding library is the same? Because of this, exploit writing has been very successful in the last couple of years. The reason is that hackers could use a hardcoded address in their exploits, which would work on various versions of Windows systems, because the virtual/linear addresses of the programs are always the same. Windows Vista presented a concept known as address space layout randomization or ASLR that loads the executables and libraries that support ASLR at arbitrary base address every time the system reboots. This makes it difficult to hardcode the addresses in the exploits, but it is still possible. The reason is the executable and all the libraries the process uses must be compiled with ASLR enabled, but this often isn't so. The developers almost never compile the executable with ASLR enabled, and even some system libraries provided by Microsoft are not always compiled with ASLR enabled. But the attacker needs only one address to be at a constant place (even when the operating system is rebooted) in order to exploit a buffer overflow (or some other bug); thus he only needs one executable or one loaded library file to not be compiled with ASLR enabled. But because it's still often the case that at least some library doesn't support ASLR, ASLR protection is rather easy to bypass and thus not really effective.

If we click on the Characteristics element in PE Explorer, we can see that the 0x0040 field is currently being used to specify whether the library was compiled with ASLR support, is marked as "Use of this flag is reserved for future use". This clearly means that the ASLR is disabled and not available for the notepad.exe, as we already saw previously. 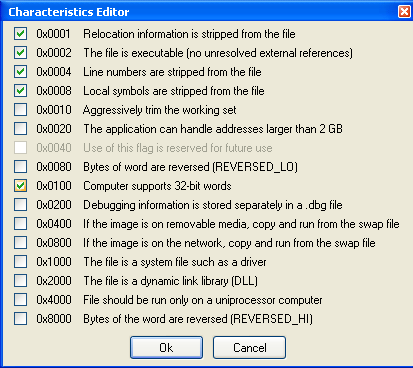 But ASLR can nevertheless be enabled system-wide by adding the MoveImages registry key to the HKLMSYSTEMCurrentControlSetControlSession ManagerMemory Management. We can do that by adding a new DWORD value, setting the key to the MoveImages and the value to 0xFFFFFFFF. This can be seen in the picture below, where the MoveImages key has been added to the registry: 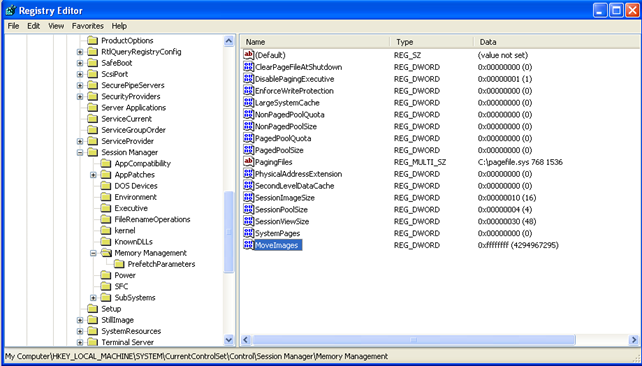 Upon adding the MoveImages key, we need to restart the computer. Then we can again execute the "listdlls.exe notepad.exe" program to check the base addresses of loaded libraries: Notice that the base addresses are the same even though we've added the MoveImages to the registry. The problem is that Windows XP doesn't support ASLR, which is one reason among many to switch to a newer system, such as Windows Vista or Windows 7. But ASLR doesn't affect only the base address where the libraries are loaded, but also the base address of stack, heap and other stuff that must be loaded into memory. But the DLL libraries are loaded at the same address regarding of the process using them; this is set up during the boot process of Windows.

Let's now start the Windows 7 system and check the base addresses of modules in Ollydbg when loading the notepad.exe executable. The modules and their corresponding base addresses can be seen in the picture below:

After that we can restart Windows, and reopen notepad.exe in Ollydbg. Let's list the modules again. Notice that the modules have been loaded at different base addresses? This is the effect of the ASLR being enabled. Now whenever we want to hardcode the address in shellcode, the address will be wrong after restarting the system, because the base address of the modules is at a different location; this means that the hardcoded address will not point to a different instructions in memory (if that memory is even loaded into the memory user address space).